The Western Pilot Project (WPP) was conceptualized by Dr. Sandy MacDonald and Rachel Levine to demonstrate the viability of a national HVDC grid overlay to efficiently transmit all forms of energy. California’s ambitious carbon-neutral energy policy would ideally anchor support for the system in the region, while allowing for the expansion of renewable energy generation and usage. Most western states involved in the WPP have proven to possess large potential capacities for wind and/or solar power, which cannot be used to full capacity without an efficient means to transmit the energy to large markets. 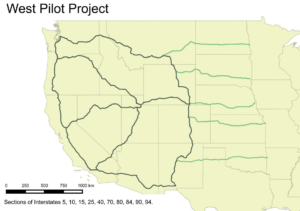 The “core” of the WPP will be centered to the West of the Plains states (shown in black) and will ideally follow existing highway rights of way. It is important to note that this route is a proposed pathway, and will ultimately depend on the costs associated with construction (which in turn is dependent on the environmental conditions and challenges in the affected areas).

To prove the effectiveness of the system, it is imperative that it accomplish what the current electricity transmission cannot: the efficient transport of electricity over long distances. Although the Western states themselves produce and utilize at least a small amount of renewable energy, most of the states with massive renewable energy profiles (such as Oklahoma, Texas, and North Dakota) are in the Plains. Ideally, the system would also incorporate this energy source by way of one additional Eastern-reaching “branched” HVDC line (shown in green) attached to the core system. Where the eastern-reaching leg is built would depend on the interest of governors in the affected state as well as the quantifiable economic benefits to the energy exporter states.

The portion of this system that is most likely to be underway first lies along interstate 10, stretching from Phoenix to Los Angeles. The HVDC line is the product of a project proposed by the partners of the Central Arizona Project, which aims to cover the Central Arizona Canal with solar panels. Excess solar energy from this structure will be purchased by a Southern California power entity and transported along the HVDC line, which will ultimately be connected to the remainder of the system. A detailed economic analysis of this HVDC segment was completed by the University of Iowa and will soon be available to the North American Supergrid team.