An underground grid system that would use existing rights of way (Figure 1) to efficiently transmit power across the lower 48 states, create jobs, reduce carbon emissions, decrease electricity costs, and protect against threats of terrorism and natural disasters.

Figure 1: Rights of way across the country 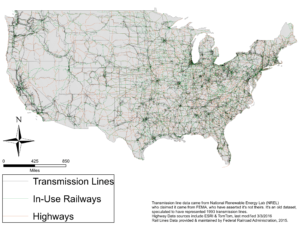 2. What are the benefits?

The cost optimized system used solar and wind resources all over the lower 48 states to generate electricity while the HVDC cables transmit the power to far away markets. Research had proven that there is enough energy within that system to supply 78 % of the power sector in the domestic market. The grid would use existing rights of way and converter stations. The North American Supergrid (NAS) would replace the current patchwork of unorganized regional utilities with a smarter and more efficient system. Much like driving on a freeway instead of surface roads over long distances, the NAS would act like an electricity superhighway (Figure 2).

Figure 2: Example of a HVDC Transmission Grid Layout with 32 nodes based around large urban areas 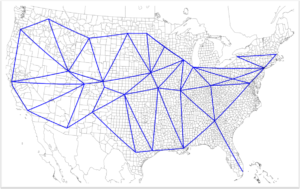 The new infrastructure would be privately financed upfront and paid for by consumer utility bills over time. Including the added user fee for the new grid, the cost of electricity would only be one cent higher per kilowatt-hour, a small price to pay for greater national security and a drastic reduction in greenhouse gas emissions.

5. How does it build on existing tech?

The NAS would use current HVDC cables underground. While cable companies have only recently figured out how to transmit electricity through direct currents over long distances, the necessary products are already commercially available. The transformers and hubs are already used by the current grid and can be used by the NAS.

6. Why is it underground?

7. Where would it be built?

In 48 states across the US. The project would start with a pilot state.

8. How long would it take to build?

We estimate that it would take 15 years to build.

The NAS has been covered by various media outlets:

Please send your questions to info@cleanandsecuregrid.org.